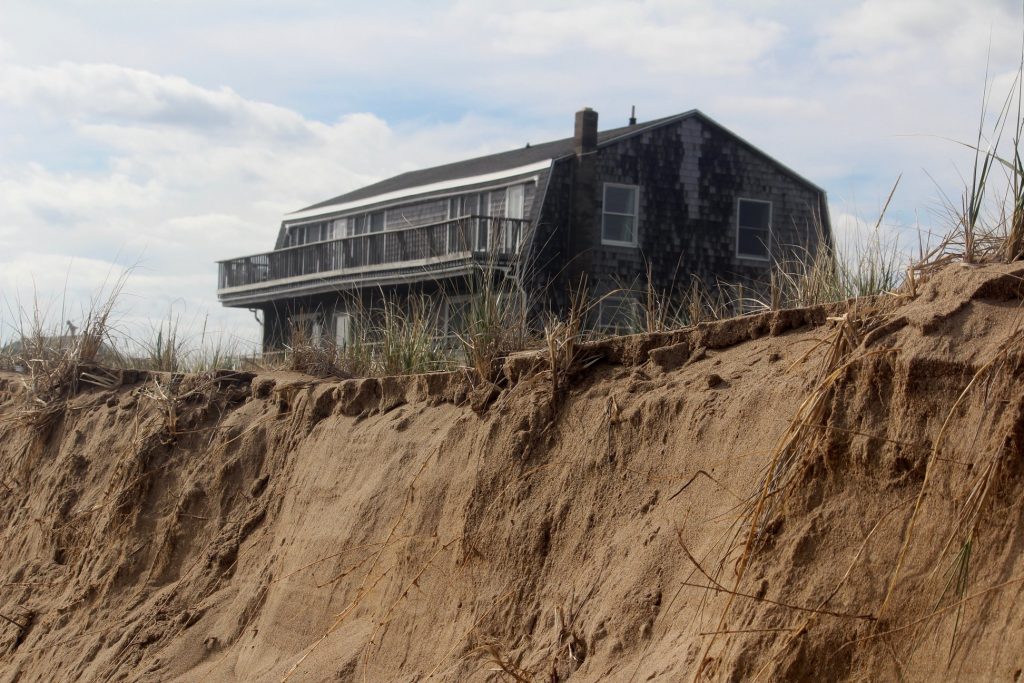 BY JACK SHEA, The Daily News of Newburyport, Edition September 7, 2020

“NEWBURYPORT — The mayor is hoping to protect Plum Island’s Reservation Terrace neighborhood ahead of the looming fall and winter storm seasons by installing sand-filled “super sacs” along the shoreline.”

“Last week, the City Council received a request of $50,000 from the Plum Island Utility Trust fund for a shoreline stabilization at Reservation Terrace. The request was sent to the council’s Committee on Budget and Finance.”

“During her update to the council Aug. 31, Mayor Donna Holaday described the urgency of the neighborhood’s need for protection due to an April storm that wiped out much of the dune system along the street and destroyed at least one home.”

“The situation on Reservation Terrace is dire,” Holaday said during her update. “Our water and sewer systems, as well as residents in the area, are now extremely vulnerable and susceptible to future storm surges.”

“Holaday noted that the city has been working with engineering consultants to design a near-term solution to protect the neighborhood. The design, she said, is a row of sand-filled super sacks

that can be installed and stacked in the area where the dune previously stood.”

“Holaday said the super sacs will be more reliable than the city’s previous dune replenishment efforts.”

“In 2019, the neighbors raised about $21,000 to buy 1,200 cubic yards of dredged sand to build a sacrificial berm between their houses and the ocean. But within a few weeks, autumn storms had washed most of the sand away, leaving the neighborhood unprotected again.”

“The sacs are weighted, they’re connected, and they’ve been unanimously approved by the Conservation Commission,” Holaday said Friday. “They will protect our water and sewer system as well as the homes. It won’t be perfect, but it will be an improvement.”

She said the city only has a short window to install the super sacs, noting the recent end of Piping Plover nesting season and the likelihood of the storm season “ramping up” in October.”

“I’m worried about the number of hurricanes and storms that have been forming,” Holaday said. “I want to move forward as quickly as possible. We’re hoping all of this can happen in the next several weeks.”

“Holaday said the super sacs will hopefully hold out until the city can implement long-term protection for the neighborhood: the long-awaited onshore displacement of Merrimack River sand along Reservation Terrace.”

“We’re hoping these will last until the dredge of the river. We’ve been working with the Army Corps of Engineers on that,” Holaday said. “We’re hoping that through all of these strategies, the dredge would be replacing the sacs and replace the dune and the berm there.”

“Ron Barrett, a Plum Island resident and active member of the Merrimack River Beach Alliance, also expressed concern for the neighborhood’s houses, noting the alliance’s work in relaxing regulations to allow residents to protect their own homes. He also added that he thinks residents should take their own measures such as raising them above ground.”

“I would let the people do something — let people put sand in front of their houses and put the bags out there,” Barrett said. “By putting the houses up in the air … they wouldn’t have to worry about being flooded on the ground floor.”

This site uses Akismet to reduce spam. Learn how your comment data is processed.